Finally, we got to see the Mercedes-Benz S-Class of the W223 generation in full. After a lengthy teaser campaign that included dozens of videos and photos, as well as some suggestive details, the company has finally unveiled its newest full-size luxury sedan. And there is something to admire here.

While it may not look that much different from the previous generation, the flagship four-door sedan gets an extensive list of all-time engineering and technological innovations that promise to take the model to the next level. Some of the most important new features include two hybrid powertrain options, a large center touchscreen with the latest MBUX infotainment system, and more active safety technologies than ever before.

Minor exterior changes take the 2021 Mercedes-Benz S-Class into the modern era. The bonnet is longer, the headlights and wheels are sharper – some rims are 21 inches – the C-pillar merges more smoothly into the rear fender, and for the first time in three generations the S-Class has horizontal taillights.

Interior: a step into the future

Obviously, the new 12.8-inch touchscreen is what immediately grabs the attention – it makes up the bulk of the center console. But take a closer look and you will understand how much the S-Class cabin has changed. The 2021 model has 27 fewer physical controls than the previous model – almost all of these functions are controlled either by voice or via a touchscreen display.

Four horizontally oriented ventilation diffusers are located on the top of the dash, just above the screen – replacing the previous model’s four rounded diffusers – and, depending on the trim level, Mercedes offers a one-piece dashboard trim in carbon fiber and glossy ebony with thin stripes. There are also 30 speakers and eight resonators, which are part of the high-quality Burmester 4D surround sound system. Also new is the steering wheel with updated capacitive touch control buttons.

The S-Class gets a new generation steering wheel with capacitive hand recognition on the rim. Sensors on the outside and back of the rim register whether the driver’s hands are on the steering wheel. That is, in order to notify active assistance systems that the driver is in control of the situation, no additional movements are needed.

The seats are still upholstered in high-quality Nappa leather with stitching in various colors. The chairs are also equipped with heating, ventilation and 10 different massage programs, as well as the new Energizing options on the touch screen.

Energizing options carry over from the previous generation S-Class, and users can choose from six different Energizing options: Refresh, Warmth, Vitality, Enjoyment, Well-being and Training. Each adjusts nuances such as music, ambient lighting, seat position and air conditioning to create the desired effect. And now, in 2021, the same options are extended to second-row passengers as part of the optional Energizing Rear package.

Thanks to its extended wheelbase and improved proportions, the 2021 S-Class also boasts slightly more interior space than its predecessor. Front headroom (106.7 centimeters) and legroom (104 centimeters) are roughly the same, but up front, the width of the cabin increases by almost 4 centimeters. And in the second row there is an additional one and a half centimeters for the head, 2.5 centimeters for the legs and a whole centimeter wide. The boot volume is also increased by 22 liters.

One of the most outstanding features of the interior is the new ambient lighting function – LEDs are integrated every 15 mm. According to Mercedes, the goal is to create a single continuous line of light throughout the vehicle. Inside everything from the door panels and dashboard to the floors (even to the rear seats), there are around 250 fiber optic lights throughout the cockpit.

It also features an updated version of Mercedes-Benz’s renowned MBUX infotainment system, so the Hey Mercedes assistant is still with you. However, it is now more intuitive and can perform tasks such as connecting a smartphone via Bluetooth, taking phone calls, and even understands 27 different languages. In addition, second-row passengers can now use it.

Another advantage of the new MBUX system is navigation with augmented reality function, which projects images onto a 77-inch virtual head-up display.

In the kit, up to four additional ones can be connected to the central large display located throughout the cabin. The first is a 12.3-inch instrument cluster that combines an LCD display and elements to create a three-dimensional effect and a driver’s gaze tracking system.

Three additional displays are available at the rear: two 11.6-inch front seatbacks and a third, a detachable 7-inch tablet as part of the Business Center Console. Both driver and passengers can access personal profiles on the center display and rear screens using voice commands, each with their own music and multimedia options. Moreover, each display can store up to seven different user profiles.

The base Mercedes-Benz S500 gets a 3.0-liter in-line turbo engine and an integrated starter-generator with EQ Boost – a 48-volt mild hybrid system – similar to those found on the brand’s current models. The power of this unit is 429 hp. and 520 Nm of torque. The model is equipped with an all-wheel drive system, and the EQ Boost offers a short-term power increase of 21 hp. and a torque of 250 Nm. 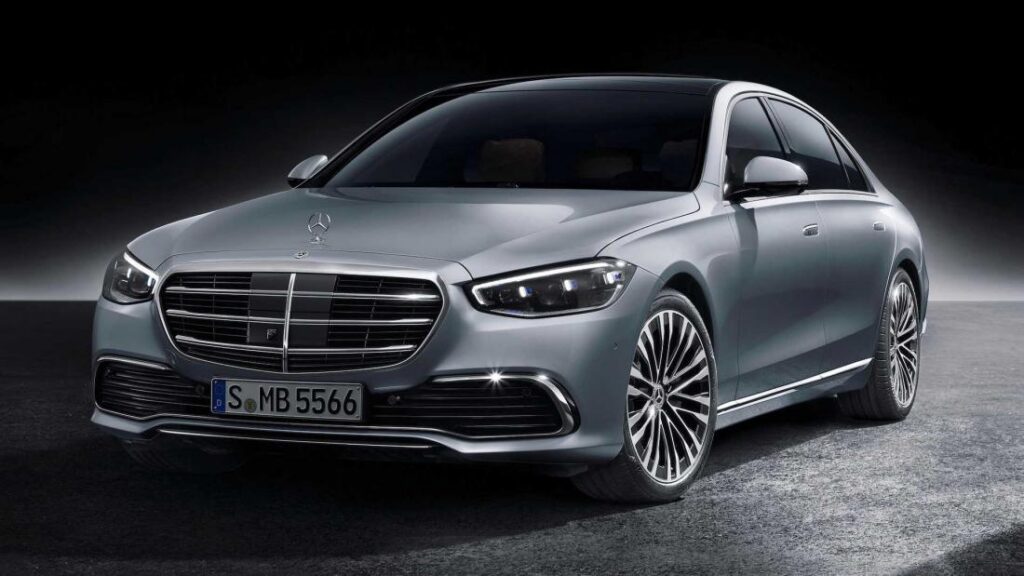 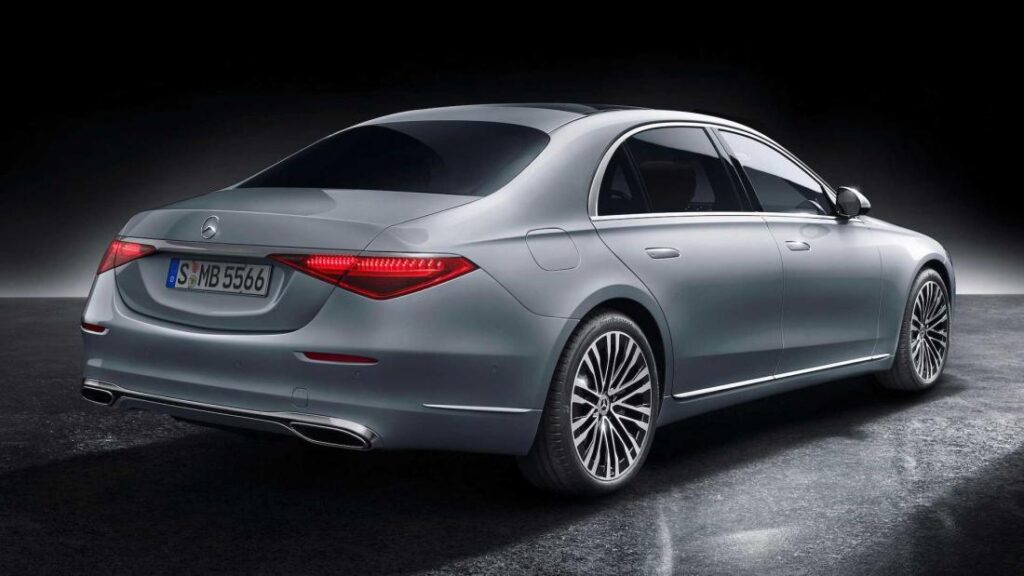 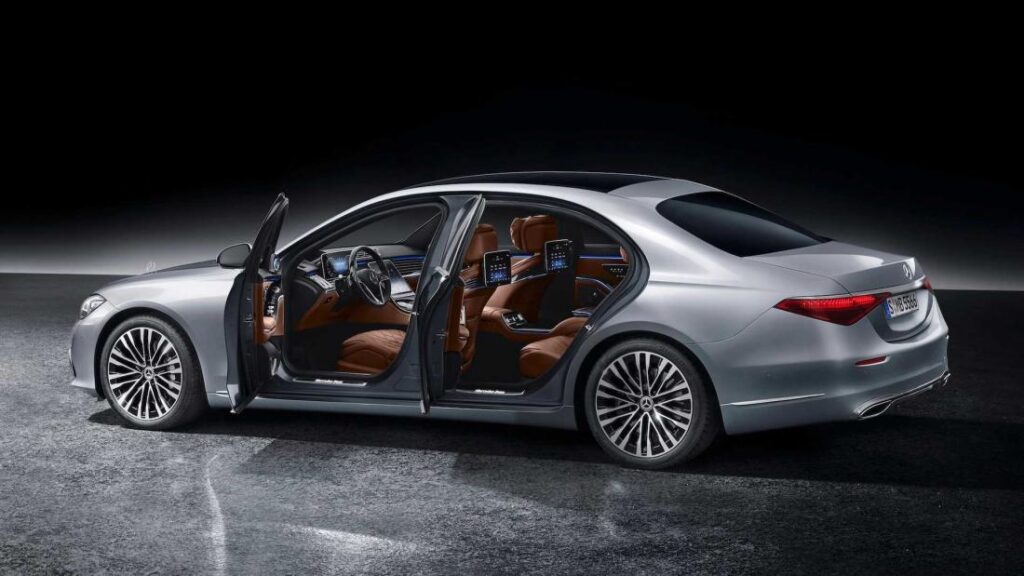 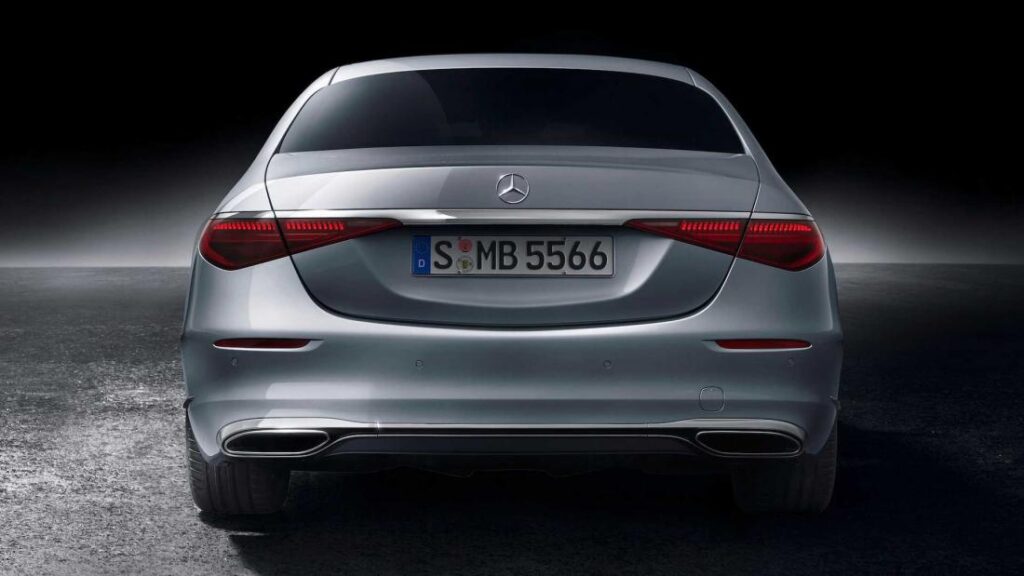 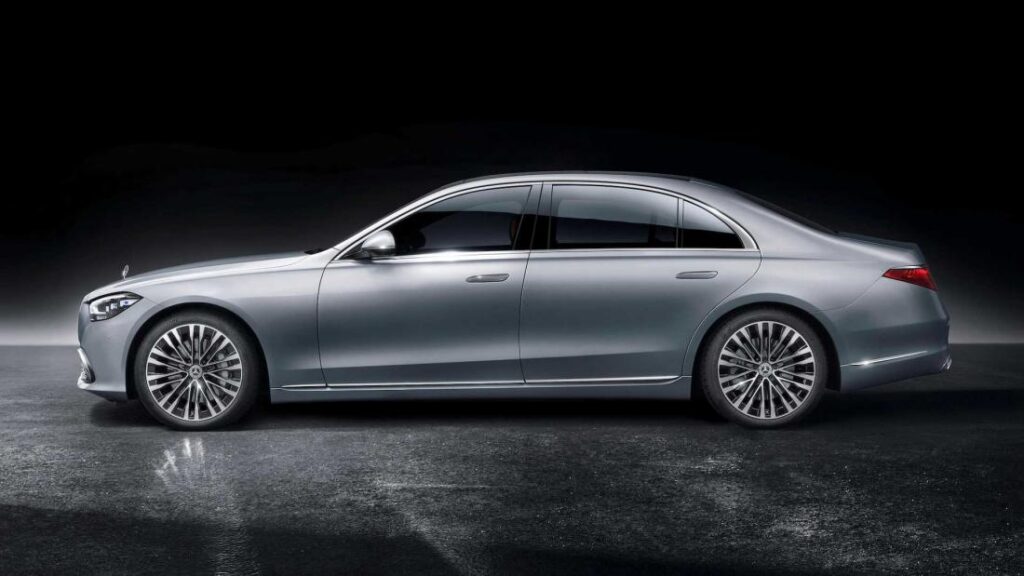 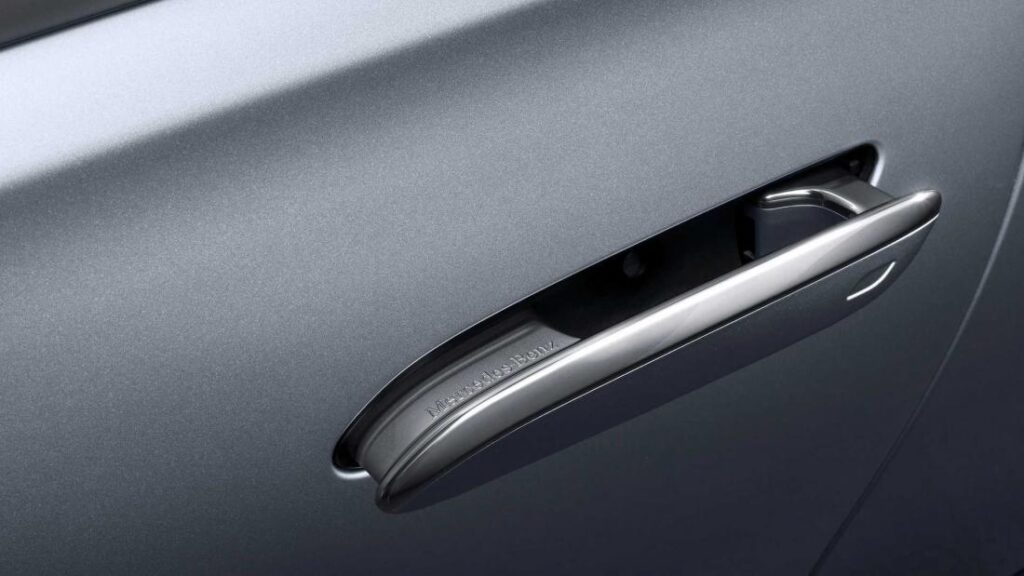 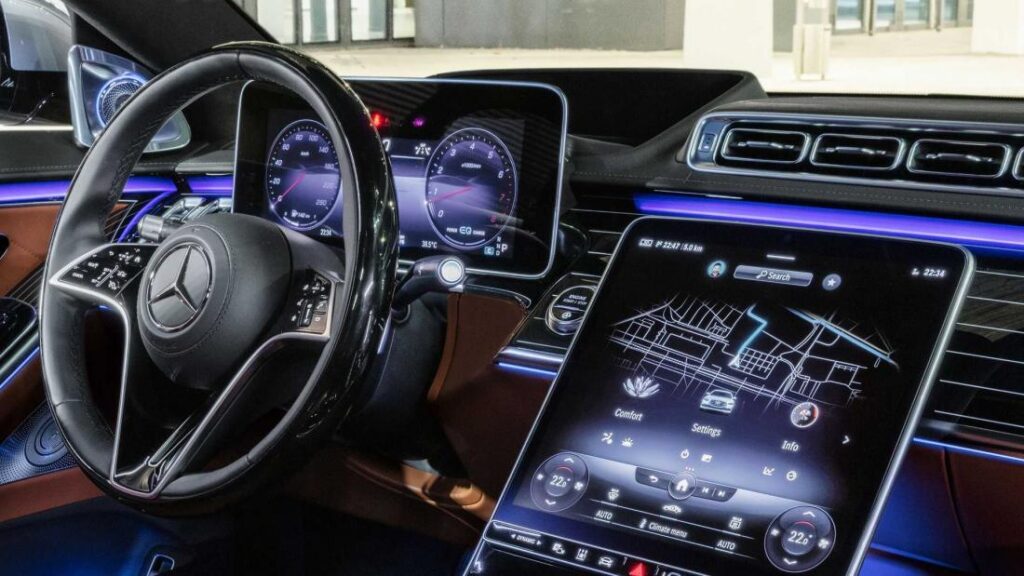 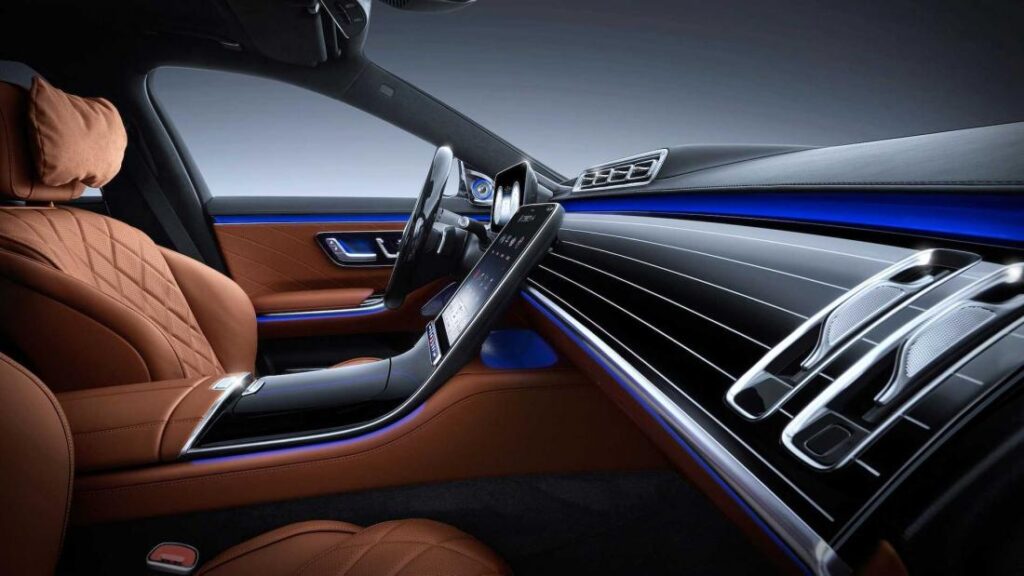 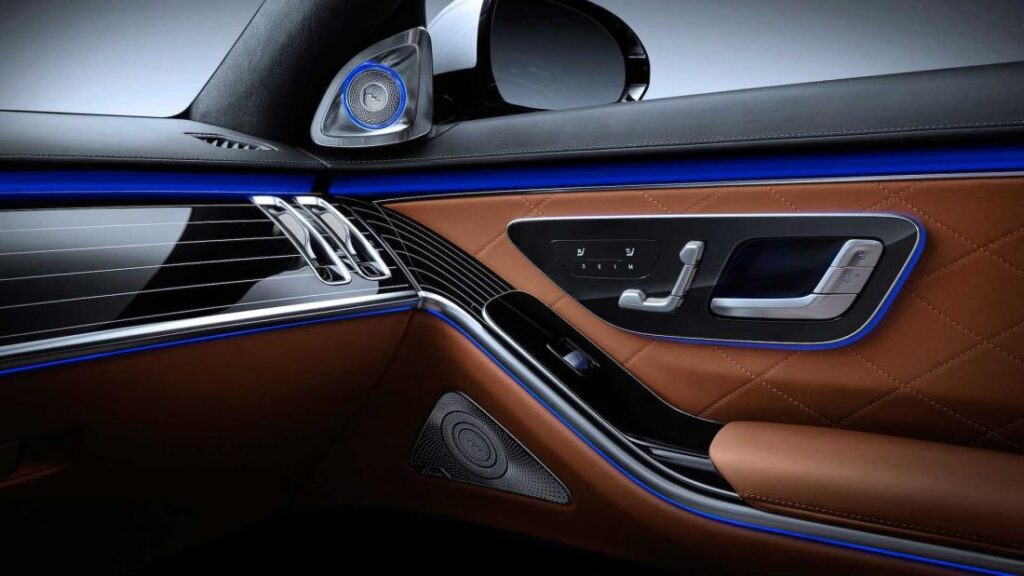 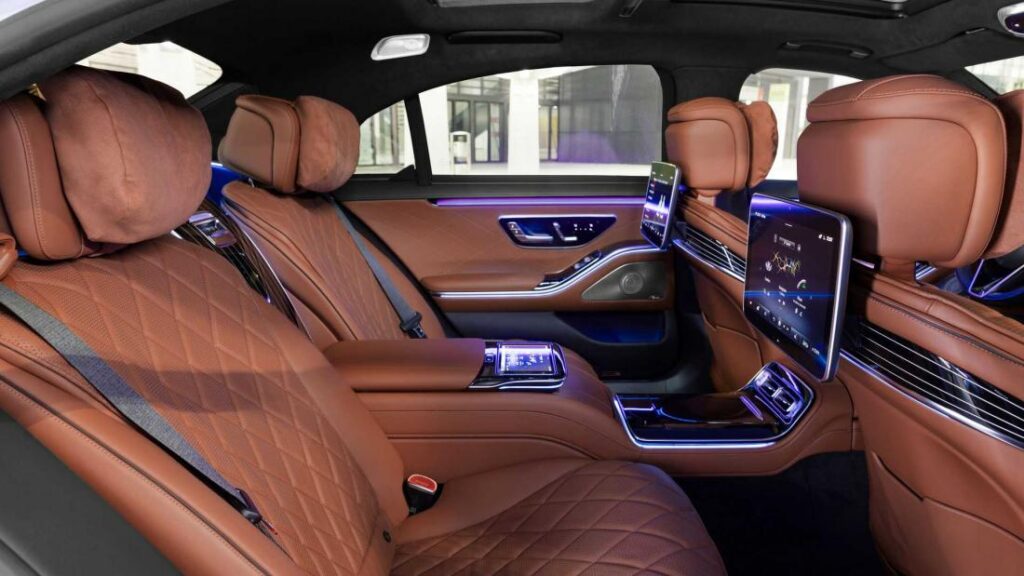 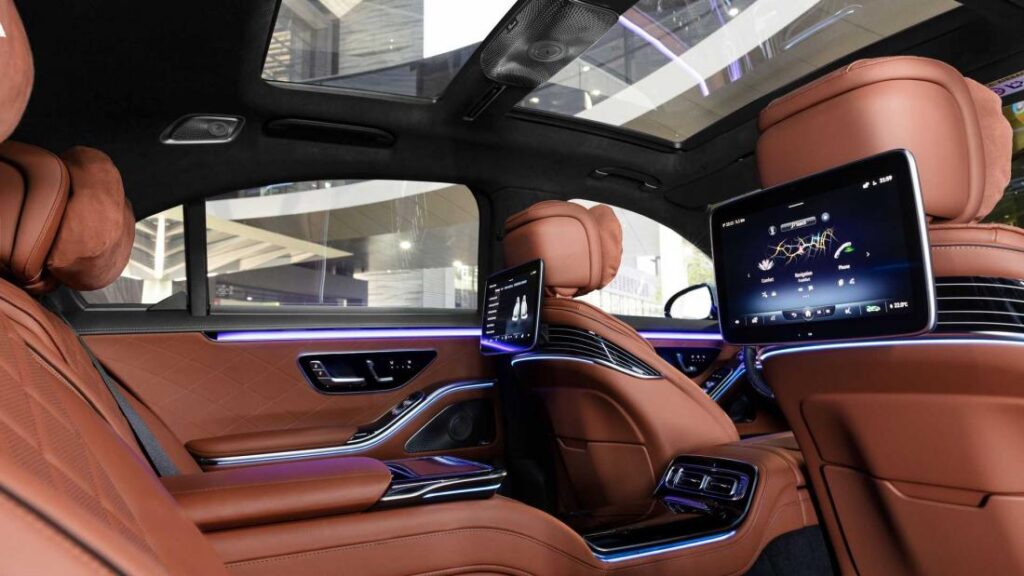 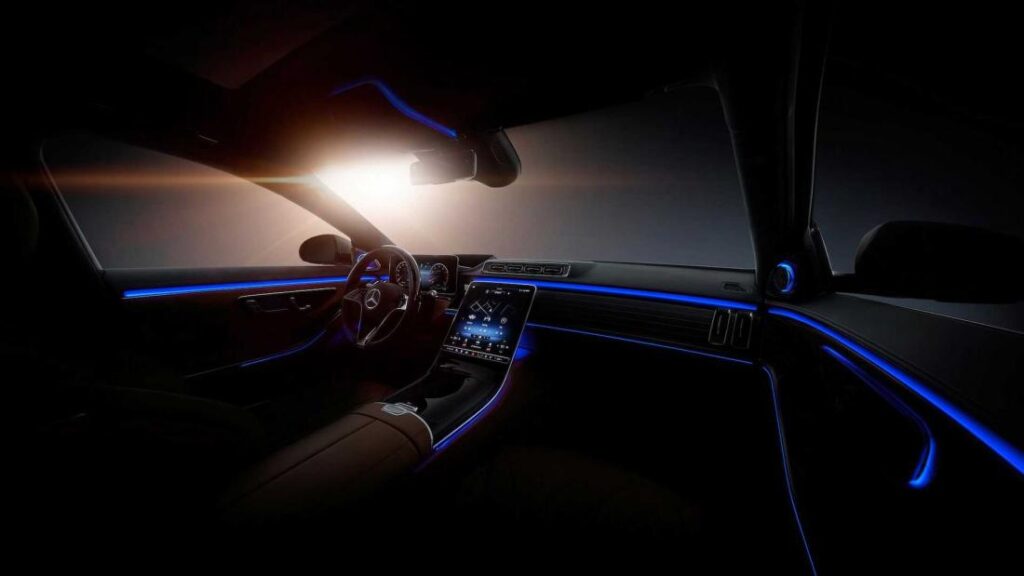